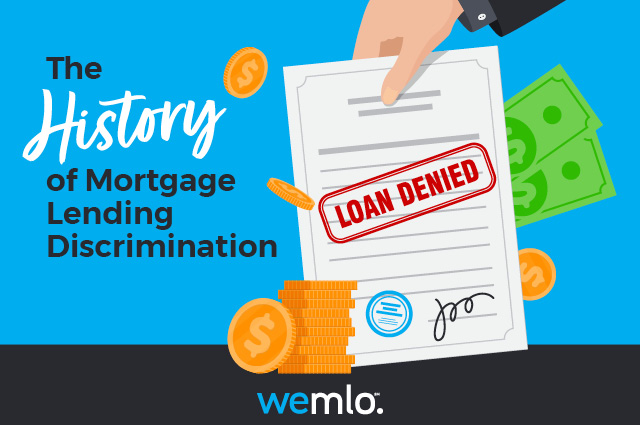 Taking a Look at the Evolution of Equitable Housing Legislation

While homeownership equality has progressed over the decades, the real estate industry has a long and unfortunate history of painful discrimination. From redlining to racially restrictive deed covenants, much of the homebuying industry in the 20th century was characterized by extreme exclusion, the aftershocks of which are still felt today.

As a mortgage professional, part of your job is understanding and working to fight mortgage lending discrimination. Here are the key dates and concepts you’ll want to keep in mind:

Many problematic realities in the housing market, including discrepancies in homeownership rates along racial lines, can be traced back to the practice of redlining. Redlining is “a discriminatory practice that puts services (financial and otherwise) out of reach for residents of certain areas based on race or ethnicity”. This practice, which originated in Chicago but gained momentum nationwide in the 1930s, allowed banks to offer higher-rate loans in Black neighborhoods. As a result, many Black families outright couldn’t purchase homes. For those who were able to purchase, they may have been required to live in designated areas and pay substantial premiums over the life of their loan.

In the first half of the 20th century, deed covenants contained an array of discriminatory and outright racist language. These documents outlined who could and couldn’t occupy certain properties, oftentimes based solely on racial identity. While the practice was outlawed in 1948, many communities can still find similar discriminatory language in their historical documents.

The Fair Housing Act’s 1968 passage sought to provide equal footing for diverse homeseekers, regardless of race, color, religion, sex, national origin, familial status, or disability. The act was signed into law by President Lyndon Johnson on April 11, shortly after the assassination of Dr. Martin Luther King Jr. The legislation was nothing short of groundbreaking at the time, and April is still celebrated as Fair Housing Month today.

While the Fair Housing Act was certainly a step in the right direction, unfortunately, widespread discrimination persisted well after its passage. Congress passed the Equal Credit Opportunity Act (ECOA) in 1974 to further the fight for equal rights. The Act “[made] it illegal for creditors to discriminate based on race, color, religion, national origin, sex, marital status, age, or because all (or part) of a person’s income comes from public assistance”.

1977: The Community Reinvestment Act is passed

Unfortunately, even with the Fair Housing Act and the Equal Credit Opportunity Act in place, housing discrimination continued, particularly in low-to-moderate-income areas. So, President Jimmy Carter signed the Community Reinvestment Act into law. This Act explicitly prevented redlining and pushed lenders to cater to the diverse credit needs of their local communities.

While it has been nearly a century since redlining was commonplace, there’s no doubt that its detrimental effects are still felt today. After all, Black homeownership reached a record-low of 40.6% in 2020. While that figure did climb to 47% later that year, it was still nearly 30 percentage points lower than the White homeownership rate of 74%. That discrepancy is even larger than it was in the 1960s, when outright housing discrimination was widespread.

The reality is, while the housing industry has made tremendous strides in advancing equitable practices, it will take all of us to fight mortgage lending discrimination. Make a point to research and understand your local market’s history of inequity. Then, perhaps consider volunteering, donating, or even simply ensuring your client base and marketing practices are as diverse as possible. Finally, remember to report any discrimination you notice or suspect. You can file a complaint with the U.S. Department of Housing and Urban Development, and help make homeownership that much more equitable.